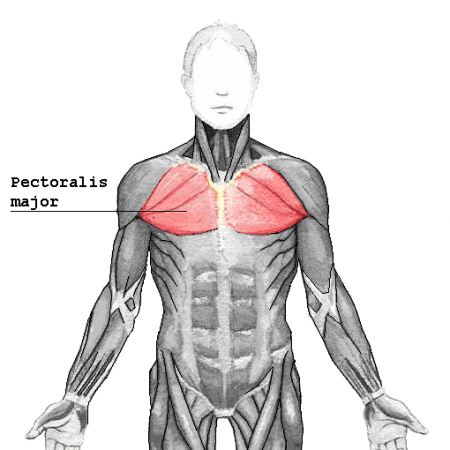 Pectoral muscles are most predominantly associated with movement of the shoulders and arms. When working together, they provide stability for bone structures such as the clavicle (collar bone) and the scapula (shoulder). Muscles of the chest enable us to lift, extend, and rotate our arms, along with playing part in the process of respiration.
Chest muscles are required in order to carry out every day activities like moving furniture, lifting heavy objects, pitching a baseball, and stretching our arms.

Additionally, internal and external intercostal muscles control expansion and contraction of the ribcage. These muscles often function involuntarily, but they are crucial to accommodating expansion of the lungs.

The pectoralis major, commonly nicknamed the “pec,” is the most critical and lucrative muscle of the pectoral region. This muscle is located overtop the anterior ribcage on both sides of the chest, mirrored across the sternum. Fan-shaped and immense, the pectoralis major extends as high as the clavicle bone and as low as the sixth rib. The muscle originates in part from the anterior of the clavicle, while another portion originates from the sternum, both connecting ultimately to the humeral bone of the arm. This differentiates the pectoralis major into a clavicular region and a sternocostal portion, each serving slightly specialized purposes.

Pectoralis major is overall involved with movement of the shoulders and arms. The clavicular portion of the muscle is responsible for upward and inward movement of the arm; meanwhile, the sternocostal portion is involved in outward, forward, and rotational movement. Pectoralis major is used most heavily in activities involving lifting, throwing, or pushing an object.