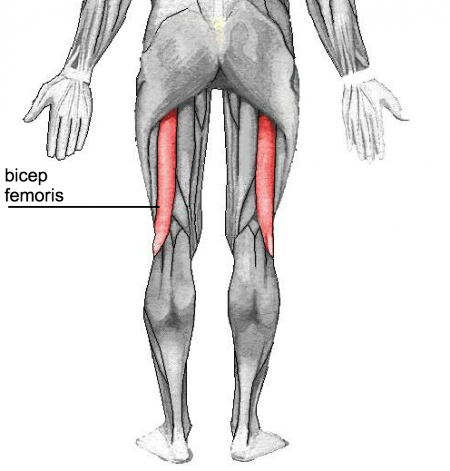 The hamstrings are the big muscles on the back of your thighs. Together with the quadriceps, the hamstrings make walking and standing possible.

The hamstrings are made up of the following muscles - the biceps femoris (short and long head), the semimembranosus, and the semitendinosus.

As the name implies, the biceps femoris has two heads. The short head originates at the linea aspera (roughened ridge on the femur) and inserts into the upper part of the fibula. The short head involves flexing of the knee and external rotation of the knee (point your right foot to the right).

The long head originates from the bone that forms the base of the pelvis (ischium) and inserts into the upper part of the fibula. The long head serves many functions including: knee flexion, hip extension, knee external rotation, and back extension at the hip joint (when the thighs are in a fixed position).