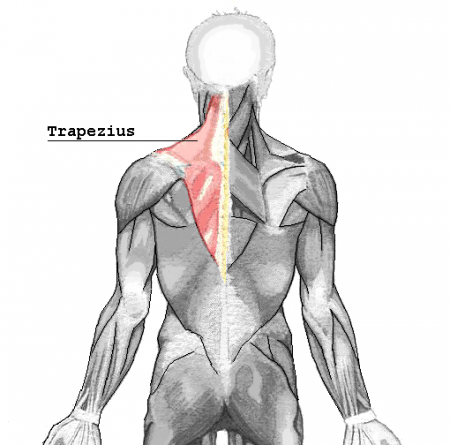 There is far more to the trapezius muscle than meets the eye. The traps are not just the muscle that sits on top of your shoulders. The traps actually travel a large portion of your spine. When well developed, the traps take on the look of a cobra hood.

The traps are divided into three portions. Those portions are referred to as the superior, medial, and inferior fibers. All three parts serve similar, but different functions.

As far as function goes, the superior trapezius has many, including: scapular retraction (drawing your scapula backwards), scapular elevation (raising the scapula), scapular upward rotation (when the scapula twists upwards), and neck extension (looking straight up). In short, the superior fibers are involved with nearly all scapular movement.

The medial, or middle, trapezius originates from the vertebral column and inserts into the scapula. The medial traps have one function which is scapular retraction.

The lower fibers are responsible for scapular depression (pushing the scapula down), scapula adduction, and, along with the superior fibers, scapula upward rotation.